Her Hometown Redemption
by Rachel Brimble

When Tanya Todd returns to Templeton Cove, she knows better than to expect a warm welcome. She burned a few bridges on her way out of town, and making amends won't be easy. First on her list is the man whose heart she carelessly shattered, Liam Browne.

Seeing the successful criminal lawyer after all these years, Tanya is interested in more than just Liam's forgiveness. As they work together to bring the man who hurt her sister to justice, the attraction between them sizzles. Suddenly Tanya's second chance could include a future with Liam…if she can prove she's changed.

He stepped toward the window and peered through the small gap between the frame and the closed blind. An array of glass display cabinets stood side by side, waiting to be filled with whatever party planners filled cabinets with, as well as what looked like a rolled rug or carpet. He was about to pull back and get his ass over to his own office where it belonged, when a very female shadow passed over the cabinets. Judging by the curve of breasts he remembered only too well, Tanya had just made herself visible. He smiled. “Got you.”

He walked back to the door and bent down, pushing open the letterbox. “Tanya, open up. I know you’re in there. Look, I just want to talk to you, okay?” Liam darted his gaze over the gleaming white floor tiles and a stack of boxes. “If you’re still upset about the whole tossing you on the couch thing, I’m sor––”

A brief glance of black denim clad legs whipped into his limited vision before a lock clicked. Tanya flung the door open with such force he nearly fell face first onto her office floor. He gripped the doorjamb and straightened.

She stared into his eyes, her darkening with sadness. “You’re right. We do need to talk.”

He frowned. “Are you okay?”

His smile dissolved and his heart kicked painfully. “What?”

When a tear slipped down her cheek, Liam reached for her before he could think just how stupid a mistake that might be. “Hey, come here.”

Taking her hand in his, Liam leaned down to retrieve his briefcase before kicking the door closed. Dropping the case a second time, he led Tanya to a low wooden cabinet and drew his hands to her waist, lifted her and sat her down on top. Her legs opened and he stood between them…just like he used to. 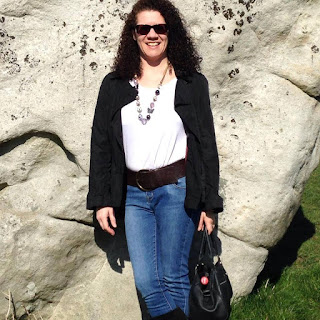 Rachel lives with her husband and two teenage daughters in a small town near Bath in the UK. After having several novels published by small US presses, she secured agent representation in 2011. In 2012, she sold two books to Harlequin Superromance and a further three in 2013. She also writes Victorian romance for Kensington--her debut was released in April 2013, followed by a second in January 2014 and the third is released Jan 2015.

Rachel is a member of the Romantic Novelists Association and Romance Writers of America, and was selected to mentor the Superromance finalist of So You Think You Can Write 2014 contest. When she isn’t writing, you’ll find Rachel with her head in a book or walking the beautiful English countryside with her family. Her dream place to live is Bourton-on-the-Water in South West England.

She likes nothing more than connecting and chatting with her readers and fellow romance writers. Rachel would love to hear from you!

GIVEAWAY
$25 Amazon or B/N GC
a Rafflecopter giveaway
Posted by Julia Pe at 2:00 AM