Commanded to marry by William the Conqueror, and facing shattered oaths and a ravening evil power determined to overthrow the new king, Alain and Kendra face a battle unlike any other as their honor, their love, their lives, and even their very souls lie in the balance.

Kendra genuflected again, grasped her basket’s handle, and turned to accompany Waldron from the church. Not across the yard to the feast hall, as she’d expected, since that was where most Edgarburh business—including private matters—transpired, but past the garden toward the manor house. In silence they ascended the outer wooden staircase, entered the building, and trod the corridor containing the bedchambers. Specifically, she realized with a start when their course became apparent, Waldron’s.

Several paces from their destination, curiosity compelled her to blurt, “What’s wrong?”

Pulling up short, Waldron gave her an odd look. “Wrong? Let me see.” He snorted, ticking the points on his fingers. “Taxes are due ere long, and the tenants have barely recovered from the war to scrape together their payments. A Norman is on his way to take possession of my daughter and the estate.” His gray eyes gazed at her levelly. “My son is dead, and my daughter acts like a widow rather than a bride.” He inclined his head at the black woolen veil she wore even as these final spring days warmed toward summer.

This time it wasn’t the sun that made her face heat. “My choices honor Del’s memory.” She gripped the basket with both fists, raising it before her like a shield. “Do yours?” 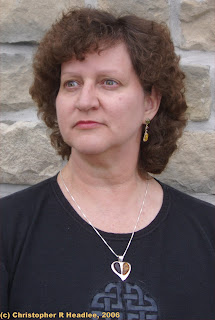 Kim is a Seattle native (when she used to live in the Metro DC area, she loved telling people she was from "the other Washington") and a direct descendent of twentieth-century Russian nobility. Her grandmother was a childhood friend of the doomed Grand Duchess Anastasia, and the romantic yet tragic story of how Lydia escaped Communist Russia with the aid of her American husband will most certainly one day fuel one of Kim's novels. Another novel in the queue will involve her husband's ancestor, the seventh-century proto-Viking king of the Swedish colony in Russia.

For the time being, however, Kim has plenty of work to do in creating her projected 8-book Arthurian series, The Dragon's Dove Chronicles, and other novels under her new imprint, Pendragon Cove Press.

Snow in July by Kim Iverson Headlee
My rating: 5 of 5 stars
I love medieval romance, and especially when we have a knight in shining armor full of guilt and a very strong minded lady, I adore when our main characters try to put their beliefs and obligations before their true feelings, the constant battle, that only leads to love, full of honor, family loyalty, do's and don'ts, betrayal and war. Imagine all that in an accurate historical moment, and you have Snow In July. Oh, wait! I forgot, there's also a little of paranormal!!
The Author give us a story with a plot full of twists and turns, chivalrous acts, the old battle between good and evil, great characters and magic.
Highly Recommended