Professor Rebecca Stanley-Wilson is having a very bad season.  The ramifications of one torrid evening with one of the great upcoming painters of his generation, will not only be felt across her life but over the entire art world. Sexy, funny, and very surprising, Permanent Spring Showers is the tale of one very memorable springtime and how it impacts a group of unique artists and dreamers. From the the hopeful Olympian with the failing marriage to the writer who is creating a new literary movement (through outright manipulation) to the romantic wondering what he did wrong to drive away the love of his life, each tale walks the line between reality and fantasy. And waiting at the end of the line is a very important painting... and possibly the revolver used in the Lincoln Assassination.

“What are you thinking? She’s an escort!”

“I’m in love, Steve. After sitting through the first twenty minutes of this lunch, it’s obvious you certainly still remember what that feeling is like.” He pushed his plate forward.

He interrupted, “And it’s not like she wants to do that her entire life, Steve, if that is what is troubling you. She is doing it to pay for college.”
I stopped, the car of my mind shifting gears again. “Wait, did you say ‘is’? Do you mean she is still doing it?”

“Well, times are tough all over,” Clark replied far too calmly for my taste. “Have you seen college tuition rates this year?”

“And she’s really in college?” I asked, shocked. I began to wonder if I was on one of those TV shows and a camera was hidden in a bush nearby me.

My shock was perfectly mirrored by the opposite reflection of the casualness of my brother.

“You didn’t think I would marry an idiot did you, Steve? I need to be mentally challenged, you know that. She is studying education; her dream’s to teach third graders.”

“You’re engaged to a hooker…”

“Escort,” he corrected quickly for a third time.

“Oh, I’m sorry,” I said sarcastically. “You are engaged to an active escort who wants to be an elementary school teacher?”

“Yes,” Clark said with a dramatic point across the table at me. “And Steve, this is where you come in. You need to help me introduce her to mom and dad.” 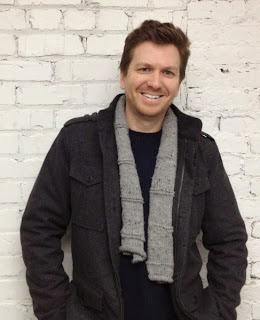 Scott D. Southard is the author of A Jane Austen Daydream, Maximilian Standforth and the Case of the Dangerous Dare, My Problem With Doors, Megan, 3 Days in Rome and Me Stuff in addition to his latest release, Permanent Spring Showers. His eclectic writing has also found its way into radio, as Scott was the creator of the radio comedy series The Dante Experience. The production was honored with the Golden Headset Award for Best MultiCast Audio and the Silver Ogle Award for Best Fantasy Audio Production. Scott received his Master's in writing from the University of Southern California. Scott can be found on the internet via his writing blog “The Musings & Artful Blunders of Scott D. Southard" where he writes on topics ranging from writing, art, books, TV, writing, parenting, life, movies, and writing. He even shares original fiction on the site. His blog can be found at http://sdsouthard.com. Scott is also the fiction book reviewer for WKAR's daily radio show Current State.

a Rafflecopter giveaway
Posted by Julia Pe at 2:30 AM